Claim your lifetime access to theZen Resource Library for resources and goodies for Midlife!

This post may contain affiliate links. We also may a receive a small commission from the companies or products mentioned in this post at no additional cost to you. See my full Privacy and Disclosure Policy here.

Each of us creates or manifests our own abundance in life.

Our universe is an abundant place.  There is enough for every one of us.  All we need to do is have a mindset that attracts abundance into our lives.

Nice theory, manifesting abundance, but it seems kind of woo-woo. What made you pick this one?

Well, I’ve seen manifestation in action.  It works.  I’ve set my mind towards something I’ve wanted to make manifest in my life and then worked towards that direction.  Voila! It appears.

However, I’m not looking at this quite like the total woo-woo way of sitting back and asking the universe to shower me with abundance without taking any steps toward it myself.

Yeah, I follow Dr. Wayne Dyer’s work and Abraham-Hicks and I believe the universe is a rich and abundant place and there’s enough for everyone.  I don’t, however, believe that if I just visualize what I want or raise my vibrations that I’m just going to have everything I want to be dumped in my lap.  I don’t expect to sit on my ass while the money rolls in.  Getting what we want out of life takes some elbow grease along with the belief that our share is out there.

That doesn’t mean that I’m not going to hedge my bet with a little woo-woo on the side of some good, hard work.

All righty then, so why test this theory now?

I’m having a bit of a financial dry spell.

Right before the dry spell started, I found out that a cat needs some pricey dental work and my hours are down on my part-time job and I needed to make my bimonthly appointment to color my hair (I’m vain, I admit it) and my insurance is due and my hours on my part-time job were cut down and my brother has decided that he’s only going to pay rent every other month, and, and, and…

How about some context? You’ve lost me.

Okay, we need to back up a little

In September 2017, I was caught in an employee purge, (aka Reduction in Force).  For the down low on how I handled that piece of fun, read my post “So You’ve Been Laid Off, Now What?“. For 17 years and 6 months of unflinching service, I was awarded six weeks pay; my three weeks of vacation; and a mass dial-in, pre-recorded message from a VP that said … and I paraphrase here …“As a company, we’re doing great and it took the effort of all of you to make it so. Thanks for your service! Now Fuck Off.”.

One person came and took my laptop away, one person took my badge as I walked out the door but no one took my dignity or my sense of joy and freedom.

I actually wanted to do cartwheels in the parking lot, I’d been trying to get up enough nerve to make the leap of faith and just quit. I was pushed and given a boatload of money to go away. It made me ecstatic! I was “that person” who was so cheerful upon leaving that my colleagues in the same situation basically told me to fuck off too.

Okay, you had options, right? Blog, a book to edit, a couple of social media clients, a couple gardens to design.

I did and I work on them all.

But then, I’m embarrassed to say that six weeks after the layoff debacle, I was back at my old company working part-time as a consultant for a vendor (because screw the company … I won’t give up my severance, right?).

The project I was working on, at the time the company told me to pack up my shit and leave completely stalled because no one had any idea how to do what I did. So, they just sat there and did almost nothing.

Going back is a small petty triumph and I (deservedly so … hey, I’m human) internally gloated for awhile. No one had asked me to come back,  I just happened to drop in to visit, saw what was going on and felt sorry for them.  I don’t like leaving friends in tight places.

Along with this new (old) part-time position, I started a consulting company, continued to work on my blog and started writing and taking classes. Enough money was coming in so I didn’t have to touch my savings (and severance).

So you caved, but now you have a part-time job, plus your other income, plus your severance and I’m assuming unemployment if worst comes to worst.

Yeah. Absolutely. Severance a great concept, but I’ve developed a ‘thing’ that borders on obsession about touching it. It’s sitting nicely in an account, it’s an even number, and I don’t want to bother it because it seems so perfect and content.

I was toodling along with a few small income streams in addition to my part-time job and that was all more than fine. I’ve done some freelance work and my blog brings in enough money each month for a tank of gas. I can make my half of the household bills and have a little leftover for books.

Everything was fine. Better than fine but then for some reason, gut-wrenching worry set in and doubt. The more I worried about money and the more I doubted my skills, the faster the flow of income and creativity slowed down.

I see, so what changed?

My mindset changed, especially since my income slowed to a trickle which made me panic and try to hold onto every cent I had. Step one toward a scarcity mindset.

Then doubt crept in. “Maybe I should go back to a safe 9 to 5.  Maybe no one wants to read what I write. It’s crap….I know it’s crap. Oh dear, I should have gotten another full-time job, I knew it!” Step two toward a scarcity mindset.

Then comparison. “Wait a minute! She’s only been blogging for 4 months and she’s making HOW MUCH and has HOW MANY SUBSCRIBERS?  Ugh!    My blog’s never going to have any subscribers, I’m never going to make money on it!” Step three and it’s full-on scarcity mode, baby.

Poof!!  Everything but the part-time job dried up.

The next step on the road, is what?

Hopefully, you’ve held on until now, I haven’t bored you to tears.

Blogging has made me paranoid about talking about myself and I’ve been told over and over that “everyone wants to know what’s in it for them, no one wants to hear about you”.

I personally like reading about other people; their lives and their interests. It fascinates me to find out what people do and why they do it. I look for bad examples as well as good!

Over the next however many months, I’m going to be testing the manifesting abundance theory. Publicly. On Medium and my blog. It’s an accountability thing.

Instead of a “this is what I did to attract abundance into my life” blog post, book, eCourse, or whatever after-the-fact; I’m going to let you watch as I bumble on down the road testing this theory. We’ll see what works and what doesn’t.  The older I get, the more mindfulness and meditation have played a big part in my life

Check out my Zen Resource Library to get Files, Downloads, Printables and add Some Zen to Your Life!

No time to Read?   Save it to your favorite Pinterest Board! 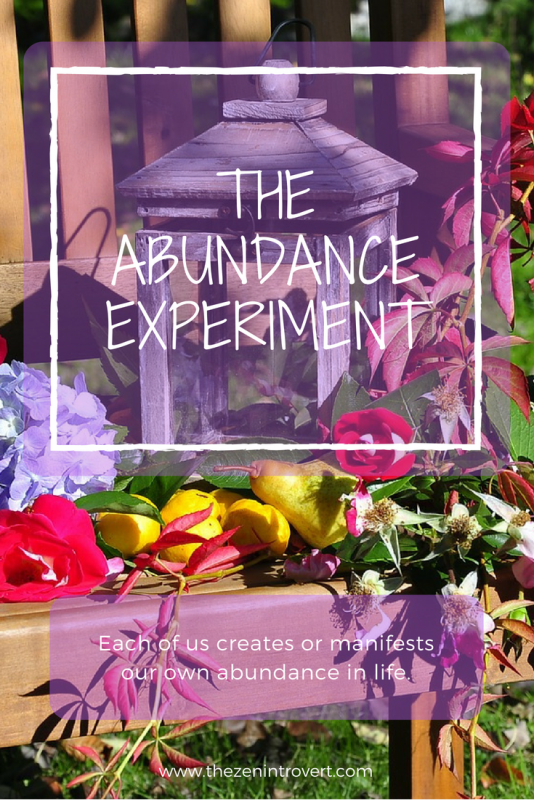 Success! Now check your email to confirm your subscription. The password is journey https://thezenintrovert.com/zen-resource-library/

I'm living my blogging and writing dream full time. I live in beautiful Colorado with my husband, my brother and two cats (who are much calmer and zen than I am....they are my gurus).

Hey There! I'm so glad you're here! Come along on a journey with me! TZI is about ways to find peace and balance in your midlife season with a little side of practical living tips. Grab your favorite beverage and hang on for the ride! xo